All the Latest New Development Property in Manchester

High Speed 2 (HS2) is a high-speed railway under construction in the United Kingdom which, when completed, will directly connect Manchester to London with a travel time of just one hour.

Scheduled to open in phases between 2026 and 2033, high-speed trains will travel up to 400 km/h on 530 km of track. The project is estimated to cost £56 Billion and will provide fast access to major cities across the country generating 22,000 construction jobs in the next five years and an expected 100,000 jobs once the line is up and running.

The KPMG report estimates that within five years of the line opening, UK productivity will rise by £15bn a year – an increase of 0.8% GDP. Better transport connections mean reduced production and transport costs, higher productivity and greater competition between UK regions.

The Northern Powerhouse is a government initiative to boost economic growth in the North of England, particularly in the core cities of Manchester, Liverpool, Leeds, Sheffield, Hull and Newcastle. It is based on the benefits of agglomeration and aims to reposition the British
economy away from London and the South East and involves improvement to transport links,
investment in science and innovation, and devolution of powers in City Deals.

Manchester At A Glance

WITH MANY OF THE FTSE 100 COMPANIES NOW BASED IN MANCHESTER, THE CITY CONTINUES TO EMERGE AS THE NORTH’S MAJOR DRIVING FORCE.

Our Latest Manchester Property at a Glance

Regent Plaza Manchester is a landmark residential development on the edge of Regent Road, Salford. It’s walls are in touching distance of Manchester City Centre, that will create identity and functionality at a prime location, on a major transitory route into and out of the City.

‘‘The Lyceum’’. An historic landmark previously well known as ‘‘The Crown Theatre’’ and originally
built in 1899, The Lyceum stands as one of Greater Manchester’s most iconic buildings..

Meadow Mill is a stunning 19th century mill in Stockport, Greater Manchester that is being  refurbished and transformed into 213 luxury apartments. This high spec development will provide first-class accommodation to renters in the Greater Manchester area, with a modern design that showcases the building’s industrial past. The development will also feature 173 car park spaces and secure bicycle storage, and is within walking distance of Stockport’s town centre.

Blackfriars Manchester: The next level in luxe city living, Local Blackfriars is a gated community comprising 380 apartments, townhouses and penthouses across two striking towers. These are architecturally blended into a Grade II-listed former public house – the Black Friar – which has been repurposed as a gateway entrance. A substantial communal garden space is complemented by second-to-none amenities that include a 24/7 concierge service, bistro, bar, gymnasium, yoga and dance studio, cinema room and fully equipped laundry. 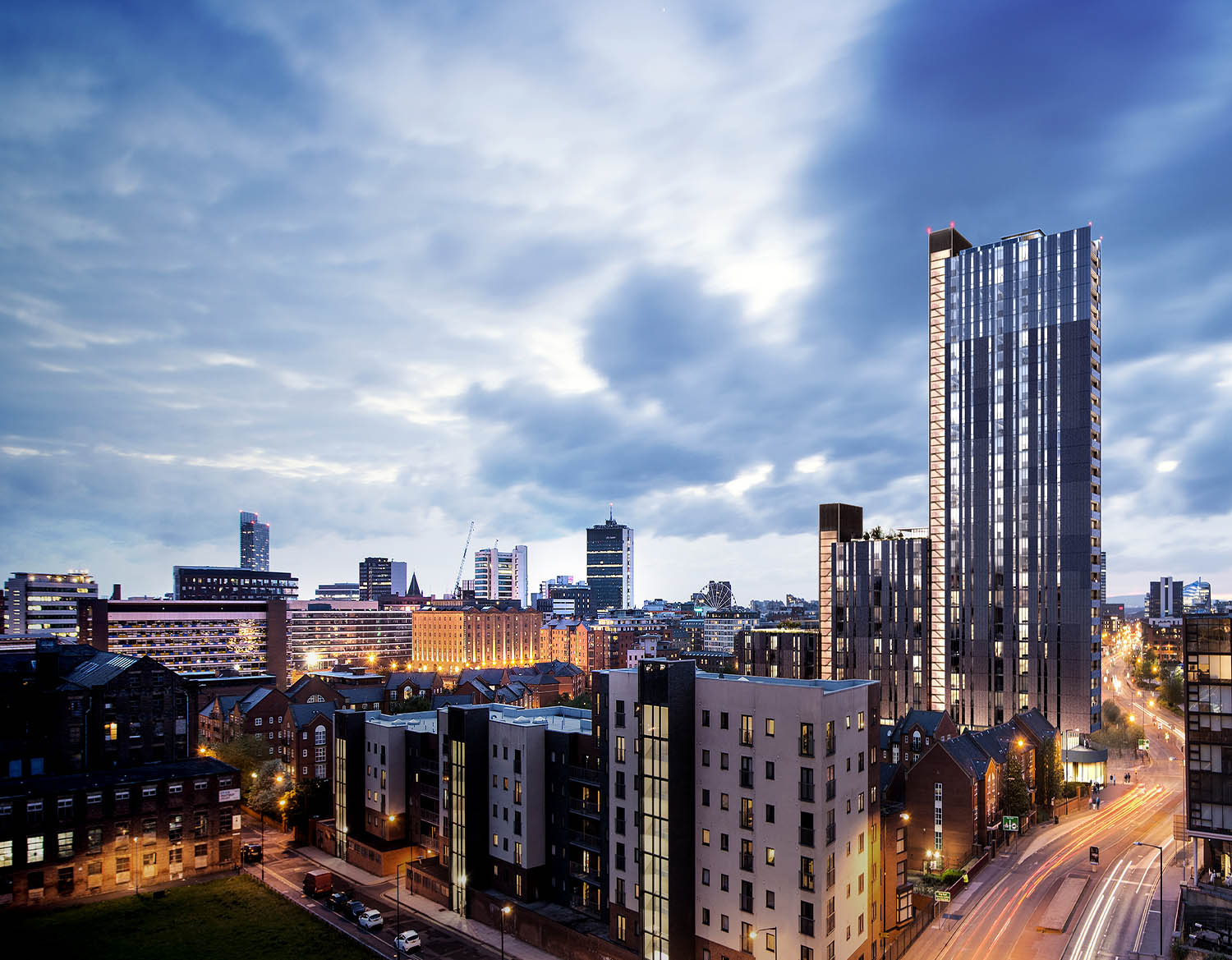 Excelsior Manchester: The stunning Excelsior Works development will transform the site of the former Excelsior book binding works into 108 high-quality apartments next to the Bridgewater Canal.

Designed by Tim Groom Architects, with interiors by UTH Studios, the development features one, two and three-bedroom apartments being made available for private sale.

Middlewood Plaza:  For Manchester Investment Property, Middlewood Plaza marks the start of a new era for Salford’s residential sector and those who invest in it. The development is set to capitalise on the enormous economic potential of the Middlewood Locks regeneration zone, as well as benefit from the host of amenities that the completed district will provide. The apartments themselves are perfectly suited to the energy and dynamism of this newly defined location. Ultra-contemporary interiors will feature high specification bedrooms, kitchens and bathrooms as standard, while all apartments will meet with the new Design Space Standards.

Speak To The Experts

You can simply call and speak with your expert Portfolio Manager on +44 (0) 207 097 5107. If you prefer to email or would like us to call you back please fill out the enquiry form.